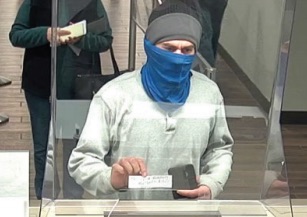 OAKLAND — Federal authorities have tied six bank robberies and attempts, all around Northern California, to the same Bay Area resident, according to recently unsealed court records.

William Edward “Rocky” Mulligan, 34, was charged earlier this month with bank robbery. If convicted, he faces up to 20 years in federal prison and a $250,000 fine. He was identified as a suspect based on a tip from a federal probation officer in Dublin, according to the complaint.

The charging records allege that Mulligan is responsible for robberies or attempted robberies in Fresno, Santa Clara, Concord, Pleasant Hill, Dublin, and Walnut Creek, all of which occurred last month. The three incidents in Contra Costa occurred on Jan. 25, according to court records.

The robbers followed a similar pattern: the robber would hand the teller a note demanding $100 and $50-dollar bills, and either leave with cash or walk away with nothing, depending on how things went from there. In Dublin, Mulligan allegedly walked away with $8,650, the complaint says.

He did not claim to be armed in any of the incidents, according to the complaint.

According to the complaint, Jan. 25 was a bad day for the robber; in the Pleasant Hill attempt, the teller told him, “No. Sorry, I’m not doing that,” when handed a note ordering her to hand over $100’s and $50’s. The robber “gave a surprised look” before walking away empty handed. At Walnut Creek, the teller simply got up and left the work station, foiling the robbery attempt. In Concord, Mulligan allegedly demanded, “That’s all?” when a teller gave him $500 in cash.

‘The View’: Sara Haines Plays ‘Ask Me Anything’ on Instagram Stories

Mulligan was arrested Jan. 28, during a traffic stop in Novato, where police allegedly found a .22 revolver in his trunk, according to the complaint.

At his first court appearance last week, Mulligan rolled his eyes and smiled innocently when prosecutors described him as a threat to public safety and asked that he be detained while the charges are pending. In court records, prosecutors argue Mulligan is a danger because of prior weapons convictions, though both those offenses are 12 and 15 years old, respectively.

Mulligan’s most recent trouble with the law, before the present case, was using a synthetic penis and accompanying bag of fake urine — a device known as a “whizzinator” — to mask the fact he’d used methamphetamine from a probation officer, court records show. For that, he was sentenced to 18 months in federal prison in 2019.