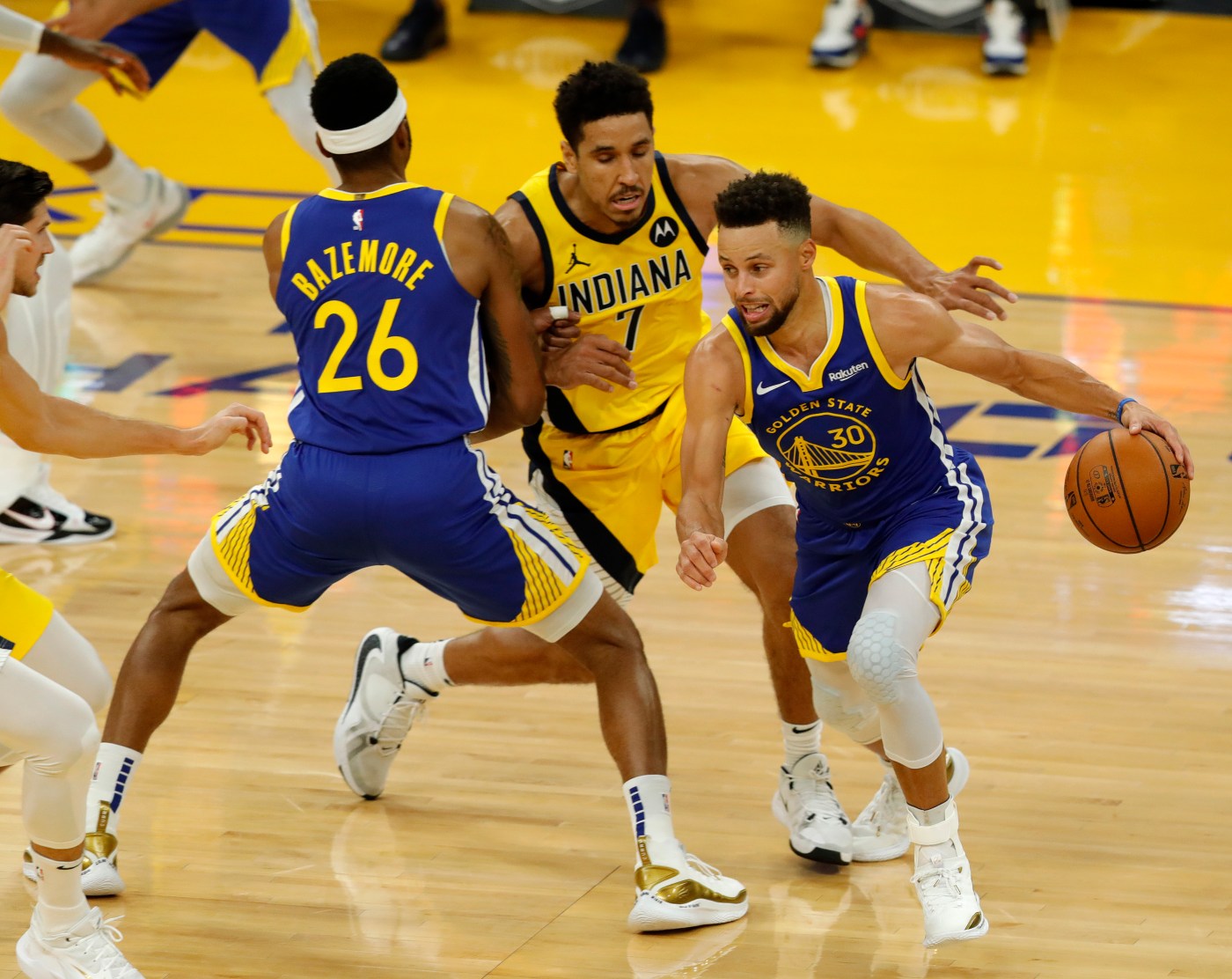 Stephen Curry was the target of an aggressive defense for the second-straight game as the Warriors lost to the Indiana Pacers, 104-95, Tuesday night at Chase Center.

The Warriors (6-5) were without forward Eric Paschall, who was placed into the league’s health and safety protocol hours before tip off. Kelly Oubre Jr. emerged from a shooting slump, Andrew Wiggins stepped up and Damion Lee led the bench in scoring, but it wasn’t enough to hold off the Pacers (7-4).

In a game with 12 lead changes and few sustained runs until the final moments, the Warriors clung to a three-point lead with 5:36 remaining. But the Pacers ultimately broke away for a decisive 12-0 run, capped by guard Aaron Holiday’s 3-pointer, to go up 100-90 with 1:33 remaining.

Here are five takeaways from the game.

1. Pacers put bodies on Stephen Curry: Two nights after the Raptors limited Curry with an aggressive game plan designed to take the ball out of his hands, the Pacers used the same blueprint and held Curry to 20 points on 7-for-17 shooting (3-for-8 from 3-point range) and three assists.

“We call it the janky defense,” Curry said.

It’s really called the box-and-1. The Raptors on Sunday used it to hold Curry to his worst shooting performance of his career, and the Pacers deployed it Tuesday. On each Warriors possession, one of Malcolm Brogdon, Justin Holiday or Edmond Sumner would pick up Curry at halfcourt and face-guard him as he tried to get open. They were instructed not to leave him for any reason.

When Curry tried to shake loose with a ball screen, Indiana would send help.

Against a box-and-1, there are opportunities for other players to get involved, but Golden State did not do a great job countering.

“Anytime you see a defense like that,” Kerr said, “it’s really important to make quick, sharp decisions. I did not think we did that, I thought we were indecisive with the ball, tried to dribble into traffic, try to make several strange interior passes — wraparound passes, bounce passes — to James (Wiseman) when we should be throwing lobs.”

After committing just four turnovers by the time they led 57-50 at halftime, the Warriors gave the ball away 12 times in the second half. Over these last two games, Curry is 9-for-33 from the field and 4-for-18 from beyond …