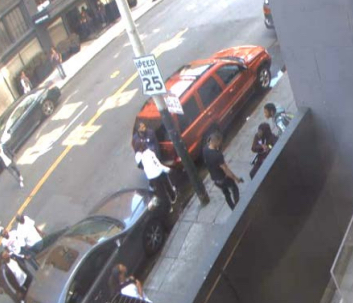 SAN FRANCISCO — After listening to an apology and pledge to do better from a city resident who admitted to unlawful gun possession Tuesday, a federal judge sentenced the man to 33 months in federal prison, the sentence recommended by the defense.

The defendant, Edrick McCroey, 28, is known for a March 2019 incident when he falsely reported his daughter had been abducted after his car was stolen. But in this case, McCroey was facing gun possession charges related to an incident when prosecutors say he fired a shot into the ground during a daytime incident in San Francisco’s Tenderloin neighborhood.

Before deciding whether to impose the defense-requested sentence, or grant prosecutors’ request for a 44-month term, U.S. District Judge William Orrick heard from McCroey, who said he spent his time in jail asking himself “why I made bad decisions that ruin my life.”

“I’m learning as I go and realizing this is not the life I want to lead. I’m realizing how smart I am and how much I want to go back to my daughter,” McCroey said, adding that at the time of his offense he was drinking and using drugs. He added that, “Being sober and a clear mind has allowed me to re-evaluate my life. Three to four years is a long time to be away from my child and I beg you your honor to be able to raise my child right.”

McCroey said he accepted full responsibility for what happened.

“You don’t just wake up and become a felon…it takes years of habitually neglecting the consequences to high risk action,” he said.

Molly Ringwald Found John Hughes To Be “Racist, Misogynistic, and, at Times, Homophobic” After Rewatching His Films That Made Her Famous

When McCroey finished speaking, Orrick said it was, “That is one of the most thoughtful statements I’ve heard since I’ve been on the bench.”

“You have the capability of doing something really good in life and I want to see what that’s going to be,” Orrick said. He encouraged McCroey to seek education and other self-help programs during and after his sentence.

McCroey was arrested by San Francisco police last March during an incident near McAllister and Jones Streets, where he allegedly fired a pistol. The criminal complaint said at the time he appeared to shoot at a man who was pushing another person in a wheelchair, but prosecutors said in court Tuesday that McCroey fired the shot into the ground. McCroey’s attorney described it as a warning shot, not an attempt to hit someone.

McCroey’s longest prison sentence prior to …