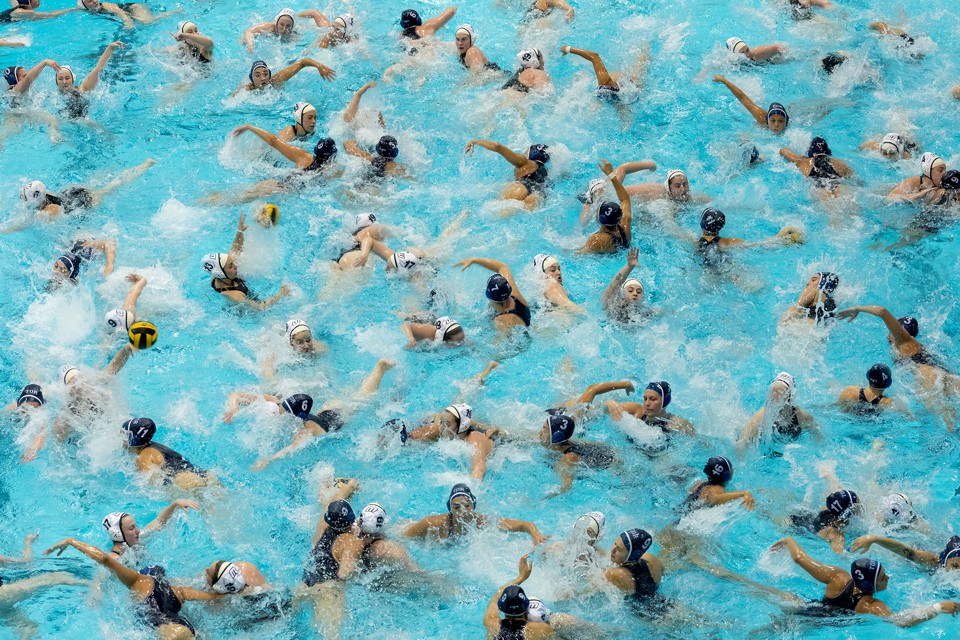 To make the images that appear in this story, the photographer Pelle Cass locked his camera onto a tripod for the duration of an event, capturing up to 1,000 photographs from one spot. The images were then layered and compiled into a single digital file to create a kind of time-lapse still photo.

On paper, Sloane, a buoyant, chatty, stay-at-home mom from Fairfield County, Connecticut, seems almost unbelievably well prepared to shepherd her three daughters through the roiling world of competitive youth sports. She played tennis and ran track in high school and has an advanced degree in behavioral medicine. She wrote her master’s thesis on the connection between increased aerobic activity and attention span. She is also versed in statistics, which comes in handy when she’s analyzing her eldest daughter’s junior-squash rating—and whiteboarding the consequences if she doesn’t step up her game. “She needs at least a 5.0 rating, or she’s going to Ohio State,” Sloane told me.

But a little over a year ago, during the Fourth of July weekend, Sloane began to think that maybe it was time to call it quits. She was crouched in the vestibule of the Bay Club in Redwood City, strategizing on the phone with her husband about a “malicious refereeing” dispute that had victimized her daughter at the California Summer Gold tournament. He had his own problem. In Columbus, Ohio, at the junior-fencing nationals with the couple’s two younger girls and son, he reported that their middle daughter, a 12-year-old saber fencer, had been stabbed in the jugular during her first bout. The wound was right next to the carotid artery, and he was withdrawing her from the tournament and flying home.

She’d been hurt before while fencing—on one occasion gashed so deeply in the thigh that blood seeped through her pants—but this was the first time a blade had jabbed her in the throat. It was a Fourth of July massacre.

“I thought, What are we doing? ” said Sloane, who asked to be identified by her middle name to protect her daughters’ privacy and college-recruitment chances. “It’s the Fourth of July. You’re in Ohio; I’m in California. What are we doing to our family? We’re torturing our kids ridiculously. They’re not …