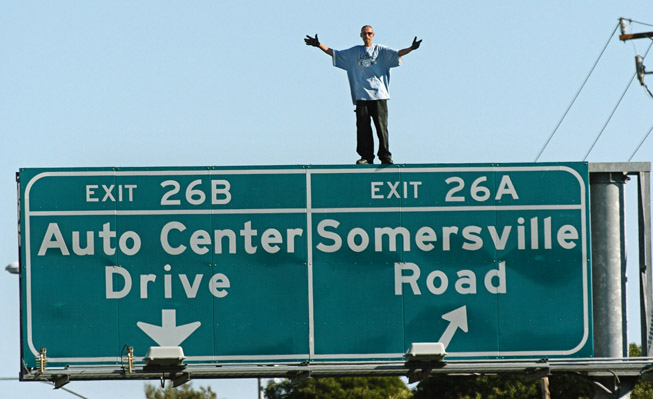 Q: Can you explain how someone can tag an entire portion of an overhead freeway sign which starts in the middle lane without being seen? This is over northbound Highway 17 in San Jose. Do folks mistake them for Caltrans workers? … Did you see the Los Angeles sign at the 680/101 split in San Jose is totally smeared with graffiti? … This is a busy place. No one sees anyone doing this?

Frank A., Kristin Carlson and others

A: Graffiti vandals usually do this at night and target older signs that they can reach by walking along guardrails or catwalks. However, the new retro-reflective signs Caltrans began installing a couple of years ago are easily cleaned with a hose, so catwalks are not needed in front of them to protect cleaning crews. That means that vandals don’t have the catwalks to hide from public view. These retro-reflective signs will be installed statewide over time.

If you see someone painting graffiti, call 911.

Q: A couple of weeks ago I traveled from San Jose to Marin County over the Golden Gate Bridge. I don’t do this very often, but I remember that in the last couple of years there have been no toll takers, so I expected to get a $5 invoice in the mail after having cameras record my license plate.

Shortly after that, I read that bridge tolls weren’t being charged during the COVID-19 pandemic. This was a pleasant surprise, but as it turns out, it’s not true. I received a bill for $8.70. When did the bill go from $5  to $8.70?

2 charged in connection with deadly coronavirus outbreak at veterans home

A: Tolls jumped from their then-$7.50 range on July 1, and more hikes will be considered over the next several years.

Bay Area bridge folks estimate they are losing $4 million a month in late or unpaid tolls.

Q: What’s going on with the work on Highway 1 from Bay/Porter northbound? After resurfacing north to the Soquel exit, Caltrans stopped work a couple of weeks ago, walked away and left …