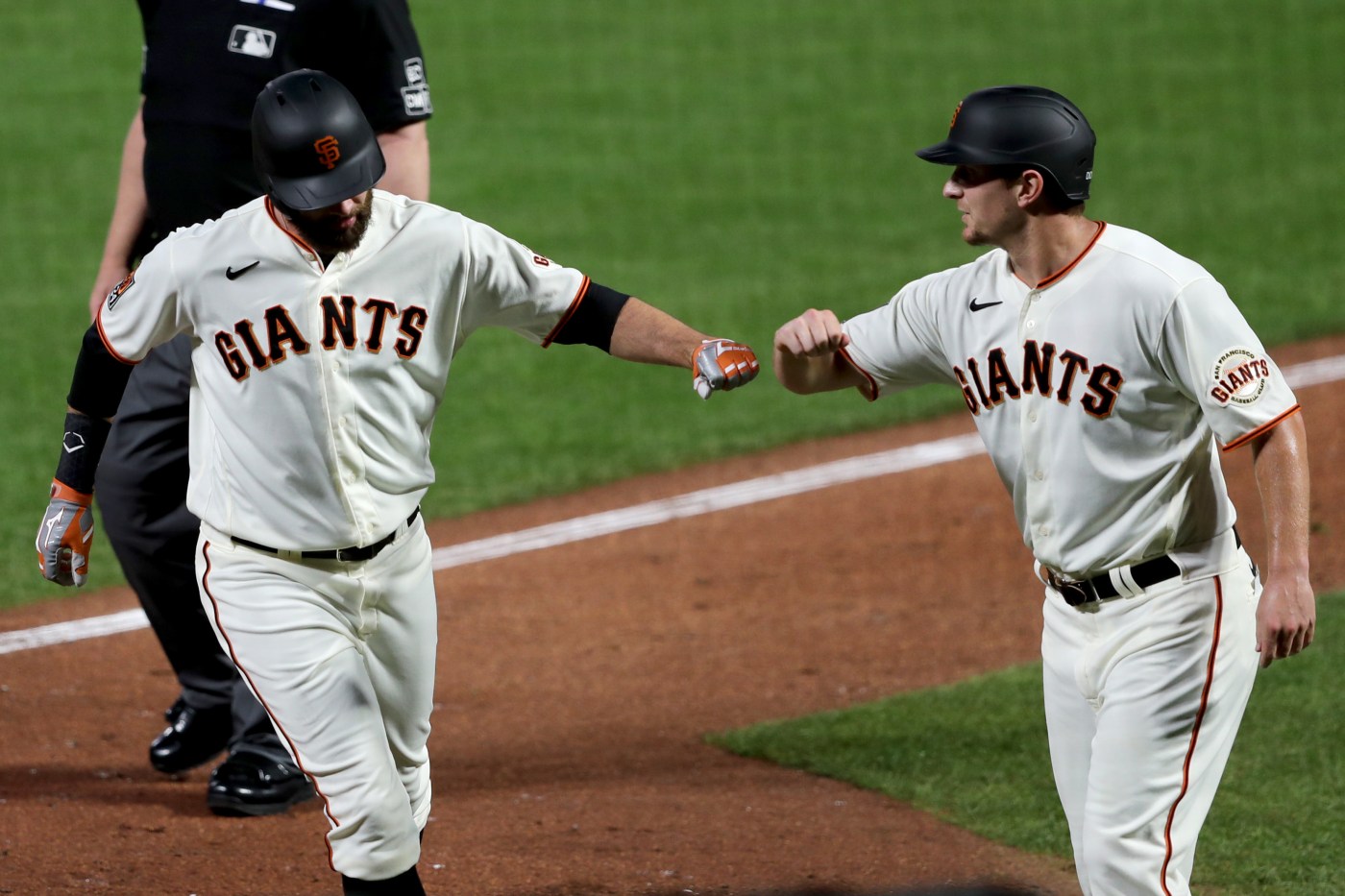 SAN FRANCISCO — The Giants wore their home cream color uniforms even though they were considered the road team. Seattle Mariners highlights were played on the big screen at Oracle Park just minutes before the start of the game.

When the Mariners made plays, fake crowd cheers were piped in. Walkup music accompanied their batters as they strode to the plate.

There were a handful of peculiarities about Wednesday’s game at China Basin, no doubt. But here’s the bottom line: the Giants earned a badly needed win over a team they had to beat to keep pace in the National League’s wild card race.

Brandon Belt and Evan Longoria both homered in the third inning and Drew Smyly had another solid outing as the Giants walloped the Mariners 9-3 to snap a three-game losing skid.

Alex Dickerson went 3-for-5 and Brandon Crawford hit two doubles and homered as the Giants, in just their third game in six days, remained in a wild card spot, tied with Philadelphia for the No. 7 seed.

After scoring two runs over 23 innings in three games vs. the San Diego Padres last week, the Giants had 12 hits against the Mariners in just the first four innings.

The Giants, who finished with 15 hits, improved to 3-0 against the Mariners this season with the two teams set to wrap up their season series Thursday afternoon. This season, the Giants now have a combined record of 13-7 against Seattle, Colorado, Arizona, Texas and the Los Angeles Angels — teams that began Wednesday out of playoff spot.

Coronavirus: Some of California’s lowest rates remain in Bay Area, but other parts of the state are catching up

The Giants, at 24-24, now have the same record as the Phillies, who lost to the New York Mets 5-4 on Wednesday. The St. Louis Cardinals are now 22-23 and in third place in the National League Central.

Smyly shined in just his second start since he returned from a left index finder strain Sept. 10.

Smyly struck out eight over  3 2/3  innings, using his curveball as his out pitch seven times. In his Sept. 10 appearance against San Diego, Smyly also had eight strikeouts and allowed one earned run in four innings of relief in what was a 6-1 loss.

The 17 combined strikeouts Giants pitchers had Wednesday tied for the most in franchise history in a nine-inning game, dating back to 1901. The other time they had 17 strikeouts was June 25, 2000 in Houston against the Astros, when Russ Ortiz had 12 of the 17.