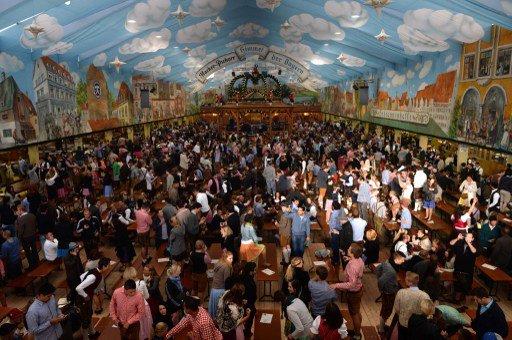 One thing has always taken me a bit by surprise at Munich’s Oktoberfest celebration — and no, I’m not talking about the humongous size of the beer steins. (Although, granted, they are something to behold.)

I’m referring to the soundtrack I hear as I make my way through the Spaten-Franziskaner-Bräu, Hacker-Pschorr and Paulaner brewery tents.

One might expect they’d be filled solely with traditional Bavarian music, but that’s far from the case. Sure, you’ll get plenty of German oompah during the world’s largest volksfest, but you’ll also get a lot of American radio hits and pop songs, which have become nearly as popular as those giant pretzels they serve.

All this reminiscing has me missing Germany and Oktoberfests of years past. If you’re celebrating at home, here’s a play list of 10 songs you would likely hear (again and again) if you were there now.

Nothing gets the Munich party started quite like John Denver, whose ode to the beautiful state of West Virginia always encourages massive sing-alongs at the festival. No one seems to know exactly how (or why) this became a “thing” at Oktoberfest. But I like to think it’s because the singer’s real last name wasn’t Denver — it was Deutschendorf.

You’ll hear this short song more often than any other at Oktoberfest, as Germans and visitors stand up from their tables, clap and sing out at top volume between gulps of beer. The song’s title translates to “a toast to cheer and good times.”

Underscoring the eclectic nature of a proper Oktoberfest playlist, this offering — nicknamed “The Flyer Song” — is a catchy children’s tune about daydreaming, animals and flying. The adults in the big beer tents have adopted it and made up a wacky dance to go along with it.

The beer tent crowds absolutely go wild when this early ’80s pop classic hits. And I’m betting you’d join right in, singing along with Nena in German — whether you know the language or not. Of course, there’s also an English version (“99 Red Balloons”), but the original is way better.

Get ready to polka with this Edmund Kotscher and Rudi Lindt-penned classic. The signature version was recorded by “Polka King”  Will Glahé and His Orchestra and reached No. 16 on the U.S. pop charts back in 1957. But everyone from Lawrence Welk to “Weird Al” Yankovic to the …