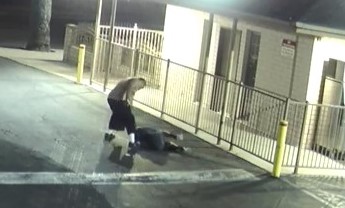 A San Bernardino man went on a stabbing spree Monday, Sept. 14, that put an elderly woman in a hospital in critical condition and wounded three others, the San Bernardino Police Department said.

At one point, police said, the man clung to the side of a moving vehicle and tried to smash its windows while the driver was on the phone with emergency dispatchers.

The man, identified by police as Eric Dean Anglin, 39, was arrested after a fight with police during which a Taser, pepper spray, a baton and other less-lethal tactics were ineffective, a news release said.

Police were first alerted to Anglin a few minutes before 6 a.m. when a driver in the 1300 block of East Baseline Street reported a carjacking.

The suspect jumped onto the side of the vehicle as the victim drove to work. As the knife-wielding suspect tried to smash the windows and demanded that the driver stop, the driver provided updates to the dispatcher. The driver also called ahead to his workplace, police said.

The suspect was able to smash a window as the victim arrived at work. There, co-workers attempted to disarm the suspect by striking him with bats, sticks and tools, but he still managed to stab two people, the release said.

He then unsuccessfully attempted to carjack another worker as she arrived, police said.

Officers arrived and ordered him to surrender. Instead, he walked toward them and the brawl began. At one point, the suspect pulled Taser darts from his body before he was handcuffed.

During the investigation, officers learned that minutes earlier Anglin attacked a woman outside a motel in the 1300 block of N. E Street. There, surveillance video showed the woman walking onto the property. Anglin approached her, pointed to something, body-slammed her to the pavement and stabbed her before running away, police said.

Later, it was learned that a second person who said he had been stabbed at the motel showed up at a hospital.

Police ask anyone with information on these attacks to contact Sgt. Al Tello at 909-384-5613 tello_al@sbcity.org.

18 arrested as part of FBI investigation …