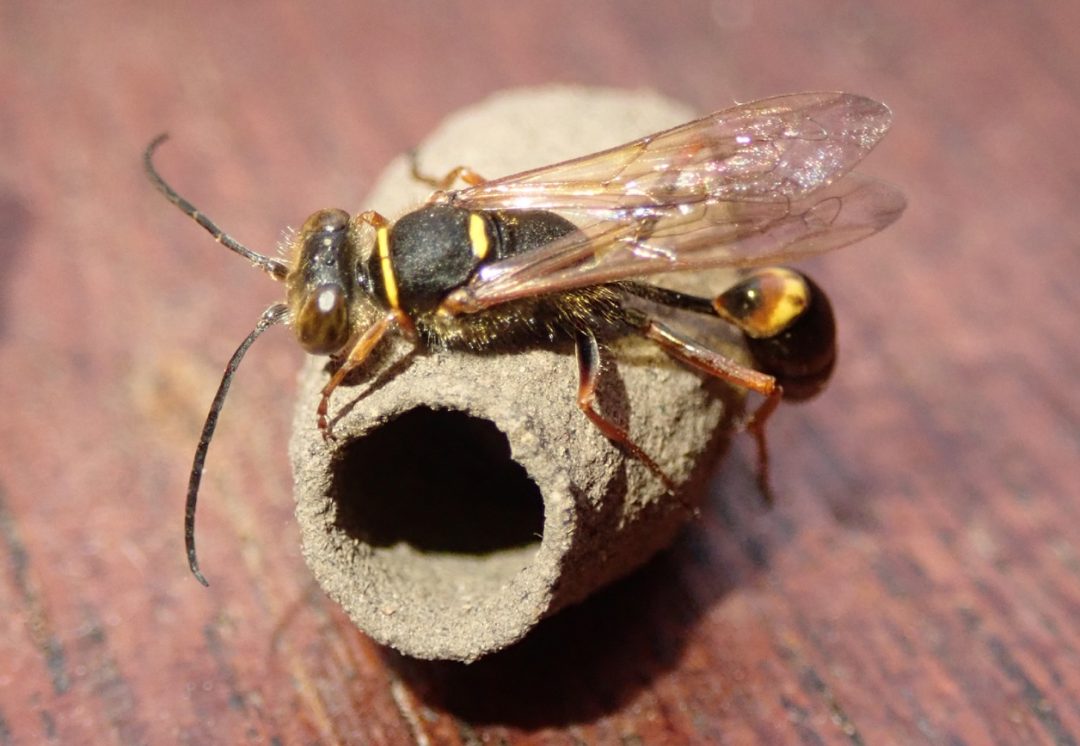 I take the darting and buzzing of flying insects in my garden almost for granted. I have a general idea of what is out there and what they are doing, and I am happy they are part of the summer landscape. The most recognizable ones like honeybees, bumblebees, ladybugs and butterflies are the easiest to spot, so are the common pests that wreak havoc on many of my favorite plants. But what about finding a new insect that hasn’t been part of the regular crowd of pollen seekers and plant chewers? It happened not too long ago in my garden, and here’s my story. First some background.

Colorado has the distinction of being the first state in the country to find and identify another non-native insect — the Asian mud dauber. When I found it, I had no idea it was a newbie to the state and America. Other non-native, plant-destroying pests like Japanese beetle and Emerald Ash borer first arrived in America from their native regions and then populated the eastern and mid-western parts of the United States before making it to Colorado.

The Asian mud dauber, which I first found in my landscape in 2016, is native to Asia, India, Pakistan and Nepal and since the 1970s has been established in parts of Europe and more recently Quebec, Ohio and Michigan. It is a hunting wasp, not at all like familiar social wasps we know — yellowjackets, paper wasps and hornets that build wasp colonies to raise their young.

Hunting wasps, including the Asian mud dauber, are like many other established hunting wasps in Colorado. They share the same behaviors where the female works alone to build solitary nests somewhere in the yard, under or above ground, near and on structures. After building the nest they search for specific insects to paralyze and return to their nest to feed to their developing larvae, also called grubs. Hunting wasps may look fearsome, yet they rarely sting — unless of course you try to catch one and hold it in your hand.

Sarah Cooper, the viral Trump impersonator, is getting a comedy special on Netflix

The Asian mud dauber (Sceliphron curvatum) was first found in Colorado in El Paso County in 2014 by Eric Eaton’s wife, Heidi. How exactly they arrived in Colorado is anyone’s guess — packing material, shared plant material or hitchhiking in a car? I am the second person to find them in Colorado and they are now in several counties.