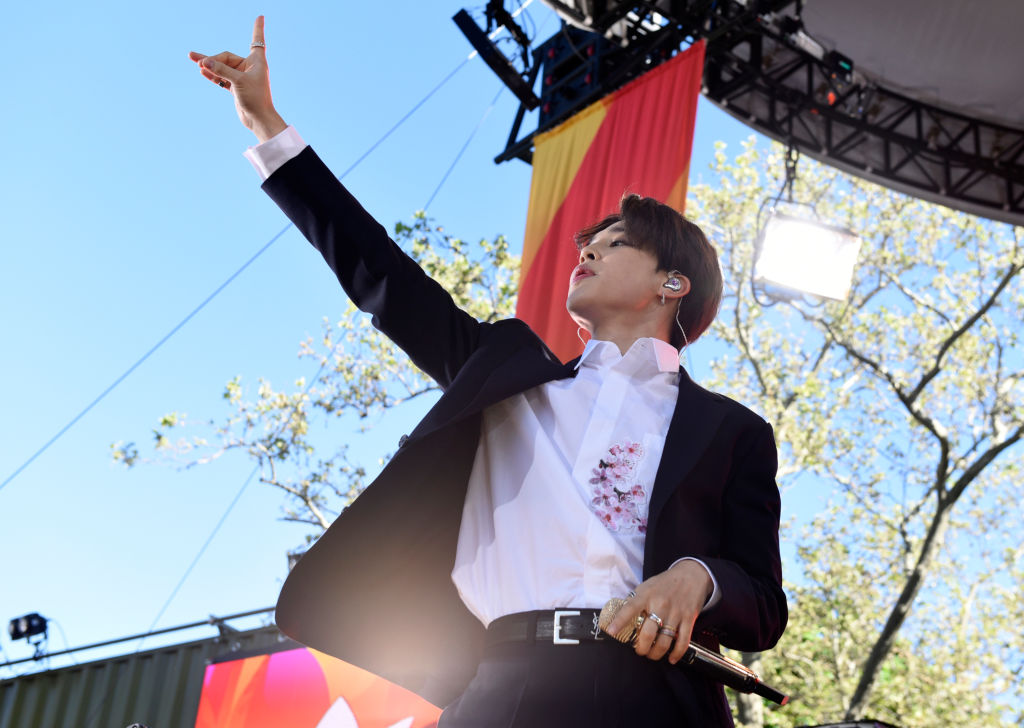 Whether he’s posting clips on social media or sharing a playlist on Spotify, fans can catch a glimpse at some of Jimin’s music recommendations. Throughout his time with the K-pop group BTS, this idol shared a few of his favorite songs created both by the boy band and other artists. Here’s our look into some of Park Jimin’s favorite songs, shared with BTS fans.

Jimin often shares his love for his solo songs, including ‘Filter’ off of ‘Map of the Soul: 7′

It’s hard to pick a favorite BTS song. There are the ones performed by the rap line and the emotional group song. Of course, each member of BTS often shares their support for their solo songs. Jimin is no exception, especially when it comes to songs performed live, like “Serendipity.”

Most recently, that includes his song from Map of the Soul: 7, titled “Filter.” His Spotify playlist featuring his favorite BTS hits included this upbeat solo song, in addition to songs from Love Yourself: Answer and The Most Beautiful Moment in Life: Young Forever.

“Let’s see, from the recent concert setlist… I like ‘Dionysus…’ I think I like ‘Dionysus,’ ‘IDOL,’ and ‘Mikrokosmos’ the most. I love all the songs, but [if I had to pick,]” Jimin said during a live stream, according to one translation.

Labrinth is known for working on a few critically acclaimed projects, Disney’s live-action adaptation of The Lion King and HBO’s drama series Euphoria, just to name a few. Jimin, however, shared his love for the song “Jealous,” with a tweet posted in 2019. It quickly became one of the most searched songs on Melon.

Will ‘Bones’ Get a Reboot or Movie Follow-Up?

When each BTS member curated a playlist for Spotify featuring their favorite songs, Jimin was sure to include hits created by Zayn, Kehlani, Frank Ocean, and Chris Brown. The playlist “Joah? Joah!” appeared during 2017, so it included hits of the time like “Shape of You” by Ed Sheeran.

Over time, however, Jimin shared other favorite songs with fans on social media. That includes “Bird” by Ha Sungwoon. According to Elite Daily, “Jimin is friends with former Wanna One member Sungwoon, so when he released his debut solo single, ‘Bird,’ in February [of 2019,] Jimin jumped at the opportunity to promote his friend’s new music …