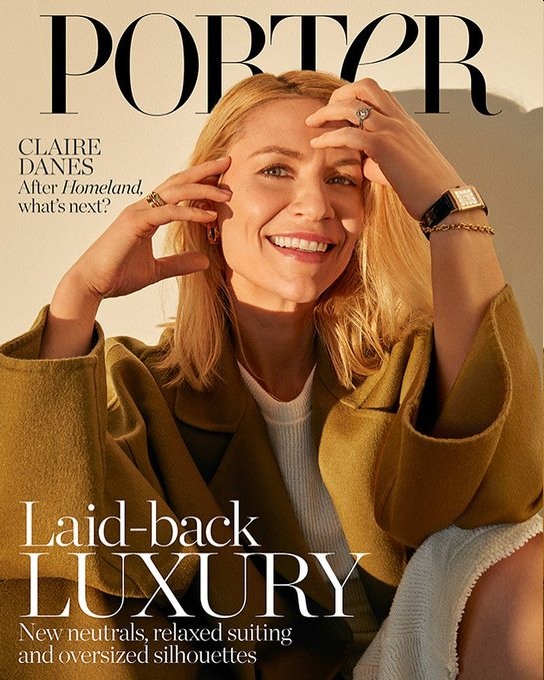 Claire Danes covers the latest issue of Porter to promote the last season of Homeland, which is apparently still happening (I’m still shocked). Claire has been giving a lot of magazine interviews for her promo, and I have to say… I’ve been enjoying them? I used to not care about her that much, but she is legitimately wonderful in Homeland and she’s grown into one of the most talented actresses of her generation. Speaking of, Claire is 40 now, and she seems very content with her life these days, which also makes her an interesting interview subject. She even talks about Hugh Dancy and how he’s a crafter! LOL. You can read the full piece here. Some highlights:

On playing Carrie in Homeland: “I’ll miss playing such a brilliant, intrepid, impulsive, flawed hero. She’s a pain in the ass but she is always right in the end. She tends to prevail in her own perverse way. She did heinous things, over and over again – we tested the audience’s sympathy all the time.” But she was also unwaveringly fearless and capable. “To pretend to be that was pretty intoxicating. It’s so fun to have that swagger.”

How her life has changed in the past decade: “When I started Homeland, I was barely married, and now, we just had our ten-year anniversary and we have a seven-year-old and a toddler – WTF? And we’ve been such citizens of the world. Both our sons learnt to crawl in Morocco [where much of Homeland has been filmed], and I have some amusing breast-pumping photos in Moroccan green rooms.”

Motherhood: “It’s reorienting, but I love it and I’ve always wanted this. So it was really interesting playing someone who didn’t love it and didn’t want it,” she says of Carrie, who voluntarily signed over custody of her daughter in season four. “I was really glad to explore that, because I think it’s still a very stubborn taboo. Women are allowed a lot these days, relative to what they have been, but they’re still not quite allowed to not want to be mothers.”

Hitting pause on her acting career to go to Yale: “It was really good for me to go to college, because I was a bit frightened of women. On film sets, I was always surrounded by adults, so the last time I’d spent any …