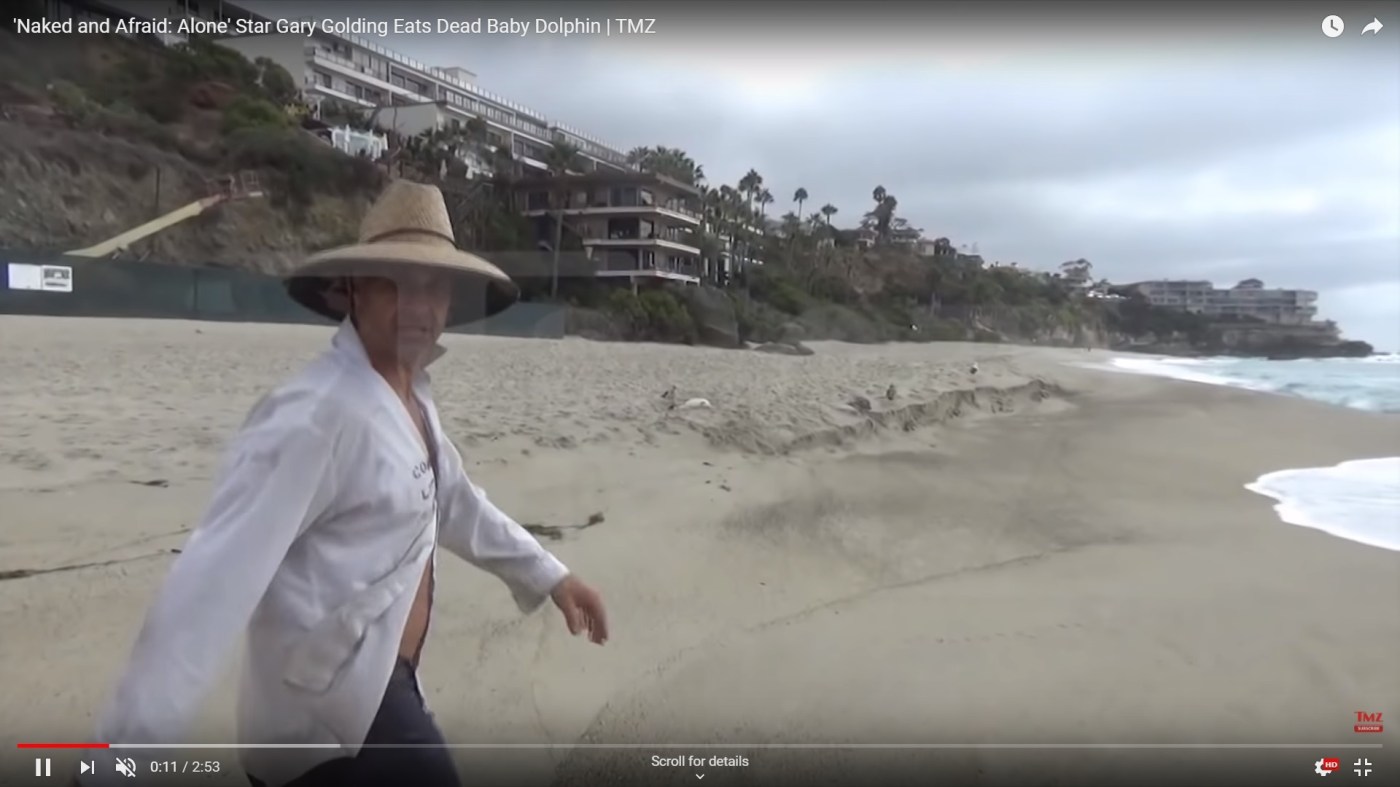 Laguna Beach Lifeguards and the National Oceanic and Atmospheric Administration are investigating whether Gary Golding, host of The Discovery Channel’s “Naked and Afraid: Alone,” violated the Marine Mammal Protection Act when he ate a dead baby dolphin at Aliso Beach.

“We’re looking into the details of this incident,” said Laguna Beach Lifeguard Capt. Kai Bond. “We are in a Marine Protected Area and he may have violated the Marine Mammal Protection Act.”

Bond said his department became aware of the incident after the celebrity news website TMZ published a story Sunday, Jan. 12, a day after the airing of the “Naked and Afraid” episode in which Golding eats the dolphin.

In the video Golding, a Redondo Beach environmentalist, says he wants to open up the dolphin to see if it has ingested any plastics or balloons. Then he reaches into its body and tears out its heart. He cuts meat from its back and then slices off the dorsal fin.

“I’m a scavenger on ‘Naked and Afraid’ and I’m going to live up to what I do,” Golding says on the video. “I’m going to eat dolphin heart and dolphin back scrap. I don’t want it to go to waste. I’m going to nourish myself with it.”

Golding takes the pieces over to a grill and starts cooking them. “I’m on the beach in Southern California literally eating baby dolphin,” he says. “Never done that before and never seen that done before.”

Neither Golding nor Discovery Channel officials returned requests for comment on Tuesday, Jan. 14.

Decades of over-fishing diminished much of California’s marine life and prompted a massive effort in the late 1990s to establish a statewide network of MPAs. Laguna’s rocky coastline and secluded coves convinced scientists and the California Department of Fish and Wildlife to create the Laguna Beach MPA – the largest in Southern California and the only citywide reserve in the state.

Justin Viezbicke, marine mammal stranding coordinator for NOAA, confirmed Tuesday that the agency’s law enforcement branch is investigating the case. The Marine Mammal Protection Act makes it illegal to take a marine mammal from the water or the beach without a permit.

The MMPA carries civil penalties of up to $28,520 per count of taking a stranded animal, a year in prison, criminal fines, and forfeiture of vessels or vehicles involved.