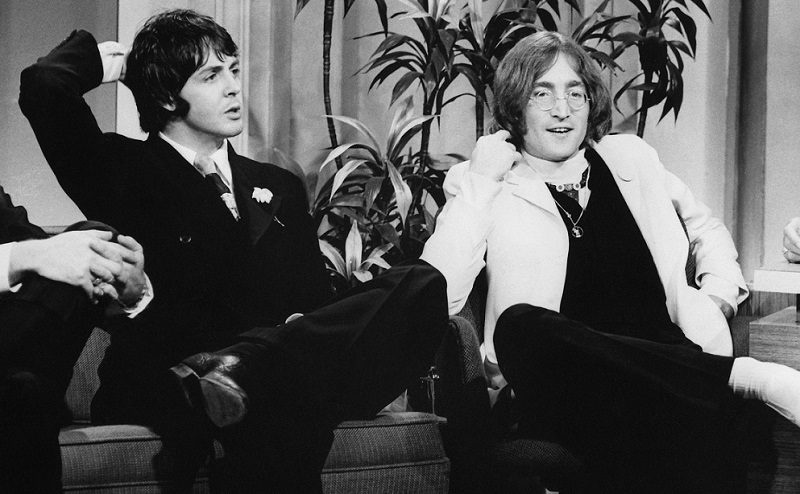 THE TONIGHT SHOW STARRING JOHNNY CARSON: Paul McCartney and John Lennon of The Beatles visit on May 15, 1968. | NBCU Photo Bank .

If you’re familiar with “Polythene Pam,” you’ve probably noticed Paul’s bass part on the track, especially during the breaks (at 0:20 and 0:41). Paul’s bass, along with

You’ll sometimes hear Beatles fans referring to a Fab Four record as “perfect.” Given the power of the songwriting, production, and individual performances, it’s not hard to understand what they mean. But from a technical standpoint, band’s recordings were far from perfect.

In some cases, The Beatles intentionally made a recording flawed. Geoff Emerick, the band’s longtime engineer, explained how it worked in the book Here, There and Everywhere. “When someone made a mistake and the others liked it, we’d often make it louder [during mixing] to accentuate it.”

On the Abbey Road album, you find an example of what Emerick was talking about on “Polythene Pam.” In the middle of that track, which was part of the Side Two medley, Paul McCartney made a mistake playing his bass part.

Though he planned to correct it, Emerick and others (including, presumably, Paul’s bandmates) insisted he keep it in the song. And the record went out with that mistake on it.

THE TONIGHT SHOW STARRING JOHNNY CARSON: Paul McCartney and John Lennon of The Beatles visit on May 15, 1968. | NBCU Photo Bank .

If you’re familiar with “Polythene Pam,” you’ve probably noticed Paul’s bass part on the track, especially during the breaks (at 0:20 and 0:41). Paul’s bass, along with George Harrison’s rocking guitar solo later in the song, really stand out on the instrumental side of things.

While overdubbing the part, Emerick recalled Paul “overshooting” the glissando (a technique of sliding between notes). Though he noticed it right away, he got overruled when he said he’d fix it. “No, it’s great! Leave it in,” Emerick said “everyone” told Paul.

Producer George Martin was in on the joke, too, Emerick said. And the Grammy-winning engineer said he and his colleagues looked for ways to make mistakes more prominent. “Sometimes we’d double-track the mistake with different instruments so it would be even more obvious,” he said.

So why were The Beatles going around highlighting flubs in their recordings, you ask? “It was all about playing a joke on the fans,” Emerick said. “Giving them a treat, something to talk about.”

Ringo had trouble with the ‘Polythene Pam’ drums as well

Paul’s minor bass flub wasn’t the only issue during the sessions for “Polythene Pam.” Prior to recording the bass part, John had …